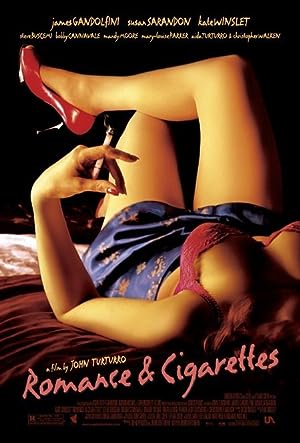 How to Watch Romance & Cigarettes 2005 Online in Australia

The cast of Romance & Cigarettes

What is Romance & Cigarettes about?

Nick and Kitty Murder are married middle-aged working class New Yorkers. Kitty catches Nick in an indiscretion when she finds a love poem, extolling the virtues of one specific body part, Nick wrote to his mistress, Tula. The poem is the last straw for Kitty regarding their marriage. Kitty has the support of their three grown daughters - biological or other - her cousin Bo, her pastor and others at the church. They help her with among other things finding and thus dealing with Tula, who she does not know, and looking back at if she made a mistake in choosing Nick over her first love. On the other side, Nick turns to his co-worker Angelo, and a local police officer/ex-military man for advice, which he also gets unsolicited from his tough talking mother. Nick still has Tula, a frank-talking Northern English sex shop clerk, who truly loves Nick's body parts as he loves hers. A little emotional distance may provide Nick and Kitty the best perspective of what their future holds.

Where to watch Romance & Cigarettes