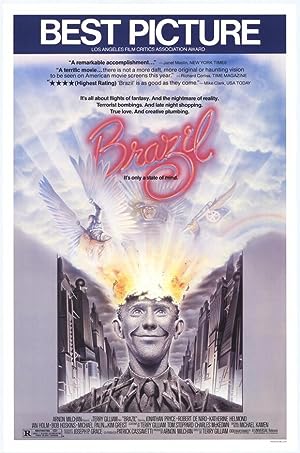 How to Watch Brazil 1985 Online in Australia

What is Brazil about?

Sam Lowry is a harried technocrat in a futuristic society that is needlessly convoluted and inefficient. He dreams of a life where he can fly away from technology and overpowering bureaucracy, and spend eternity with the woman of his dreams. While trying to rectify the wrongful arrest of one Harry Buttle, Lowry meets the woman he is always chasing in his dreams, Jill Layton. Meanwhile, the bureaucracy has fingered him responsible for a rash of terrorist bombings, and both Sam and Jill's lives are put in danger.

Where to watch Brazil

Which streaming providers can you watch Brazil on

Here is the comprehensive list of streaming providers that will show Brazil in Australia. If Brazil will appear with other providers further down the line, this table will be updated.

The cast of Brazil

Brazil is a great Drama movie, we’ve selected several other movie options that we think you would like to stream if you have watched Brazil

Brazil is a great drama show, we’ve selected several other show options that we think you would like to stream if you have watched Brazil