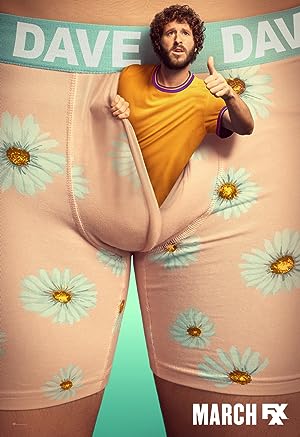 How to Watch Dave Online in Australia

What is Dave about?

A neurotic mid 20's suburbanite's convinced he's destined to be one of the greatest rappers of all time. Now he's got to prove it to everyone else.
This hit comedy series is based on the real life of Dave Burd. When he is on stage, he is known as Lil Dicky. The first season introduced us to his life and antics, particularly his struggles to become one of the greatest rappers ever. Early episodes focused on the forming of his entourage. After all, can a rapper ever really exist without one.

Where to watch Dave

Which streaming providers can you watch Dave on

Here is the comprehensive list of streaming providers that will show Dave in Australia. If Dave will appear with other providers further down the line, this table will be updated.

How to Watch Dave TV Show

Dave is available exclusively in Australia via BINGE and Foxtel. The show will air at the same time as it goes out in the States. The new show is not available on free to air, or with any other provider at this moment in time. You can access BINGE for FREE with a 14 Day Trial.

After your free trial is over and you have watched Dave, you can choose between three different BINGE plans. A Basic plan costs $10 per month to stream on one device in Standard Definition. A Standard Plan comes in at $14 per month and allows you to stream on two devices in either standard or high definition. And last but not least there is the BINGE Premium Plan ($18 per month) which allows you to stream on up to four screens/devices in SD or HD. All BINGE plans are ad-free.

BINGE has no lock-in contract or equipment fees, which means you can cancel anytime if you’re no longer using it. Once you have caught up on Dave, you can watch loads of other TV Shows and Movies on BINGE.

Dave episodes can also be streamed via Foxtel and Foxtel Now in Australia on Fox Showcase. To watch on Foxtel with a Standard or HD TV, you have several choices, including subscribing to the Foxtel Plus pack to access over 50 channels of entertainment, drama, lifestyle, docos, reality and more. You also have the option to watch Dave online using Foxtel Now, which currently has a 10 day free trial. Both choices include the option to stream programs free using the Foxtel Go app.

Watch Dave with BINGE from Telstra

Telstra customers can get their first three months of BINGE Standard for free with selected mobile and internet plans. If you prefer the Premium plan, then you can take advantage of this option for just $4/month for the first three months. Both of these plans allow you to watch Gossip Girl.

To take advantage of this offer you will need an eligible mobile or broadband Telstra contract.  BINGE from Telstra comes with all the same features as a standard BINGE subscription, including an easy to use app.

Lil Dicky is back. After a breakout first season the surprise comedy hit, Dave, is ready to make us laugh for a second time.  Season 2 promises to be an all-star affair with guest appearances from Benny Blanco, Kendall Jenner, Kevin Hart, to name but a few.

While they provide the stardust, our man Dave continues on his quest to be the greatest rapper of all time.  Find out how you can watch Dave Season 2 right here.

Will Lil Dicky rise up and grab the chance to become one of the greatest rappers of all time? Or is he destined to be one be a one-hit wonder?

Season 2 of the comedy TV series brings us back to Lil Dicky. He is no longer the underdog that everyone loved. Post breakout song, there are serious expectations to deliver a debut album. And there is the rising stardom to contend with too. Something that Dave is not entirely comfortable with.

One thing guaranteed from the FX-produced TV series is that the show’s edginess will remain. Where you had a motley group coming together to launch the success of Dave in the first season, episodes of the second will give us a closer look at his life. There are some serious choices he will have to make if he wants to make it to the top.

The new season returns with a stellar support cast that includes Taylor Misiak as Ally, GaTa as GaTa, and Andrew Santino as Mike. And of course, Dave Burd as the main character. Find out how you can watch Dave season 2 right here.

When does Dave Season 2 air

The new season of Dave will air on June 17 with a double-episode event. All episodes of the comedy series are exclusively available to watch with BINGE and Fox Showcase. If you have a BINGE or Foxtel Now subscription you can watch it instantly.

Stream Every Episode of Dave S1

Once you watch Dave S2 on BINGE, you can catch up on every episode from the original series. This will all be included in a free trial or existing subscription for the ultimate BINGE session. If you’re still looking for something to watch after that, there are other top comedies like Modern Family, Friends and High Maintenance.

What to Watch after Dave

If you’re looking for something to watch after the new season of Dave, there are literally thousands of TV episodes and movies to watch on BINGE. From Drama and Crime to Comedy and Kids TV, it’s all here on one easy to use platform.

Best Shows and Movies to watch on BINGE

Check out what’s on BINGE with the TV Show and Movie options below. This is where you will find out the best titles streaming on the platform today.

The following is a list of compatible internet-connected devices for which you can stream the Dave S2 whether at home or on the go.

The cast of Dave

Dave is a great Comedy movie, we’ve selected several other movie options that we think you would like to stream if you have watched Dave

Dave is a great comedy show, we’ve selected several other show options that we think you would like to stream if you have watched Dave