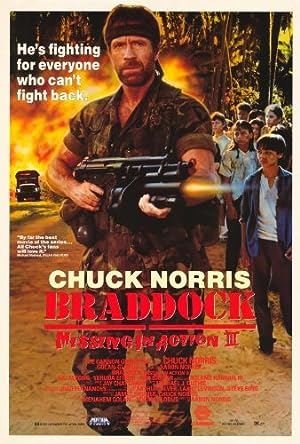 How to Watch Braddock: Missing in Action III 1988 Online in Australia

The cast of Braddock: Missing in Action III

What is Braddock: Missing in Action III about?

Colonel James Braddock has a Vietnamese wife who was supposed to leave Vietnam with him when they evacuate. But she loses her papers and wasn't allowed in the embassy. Braddock went looking for her and her friend took the bracelet Braddock gave his wife and was in an explosion. When Braddock finds the body with bracelet, he assumes it's his wife so he leaves Vietnam. 12 years later a Reverend in Vietnam who was visiting the States approaches Braddock telling him that his wife is alive and that he has a son. Braddock doesn't believe him at first but when a man at the CIA asks him to meet with him, Braddock realizes it's true. So he tries to get them out. So he contacts a friend in Thailand to get what he needs. As they are about to leave, the CIA tries to stop him but Braddock gets away, gets his equipment and heads to Vietnam. When he arrives he goes to the orphanage for Amerasian children, where the Reverend works. He takes him to them and is surprised to see them and his son resents him cause he thinks he abandoned them. They try to leave but a Vietnamese Colonel takes them, he kills his wife and subjects Braddock to torture. Braddock escapes with his son, whom he says to go to the orphanage. The Colonel goes there and takes the Reverend and the children to a prison. Braddock then tries to rescue them.

Where to watch Braddock: Missing in Action III