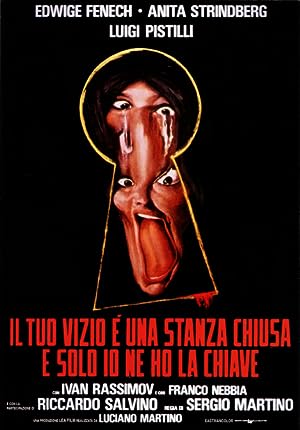 What is Your Vice Is a Locked Room and Only I Have the Key about?

Oliviero is a burned-out writer, living at his estate near Venice, his dead mother dominating his imagination. He is also a degenerate: sleeps with his maid and his ex-student, hosts Bacchanalia for local hippies, and humiliates his wife Irina in front of strangers. She lives in terror. When a young woman is murdered, police suspect Oliviero. Things get complicated when his young, beautiful, and self-confident niece, Floriana, pays an unexpected visit. A silver-haired stranger observes. More women die, and thoughts of harming Irina give Oliviero new inspiration. What's Floriana's game and who's the observant stranger? Watching all is a black cat named Satan.