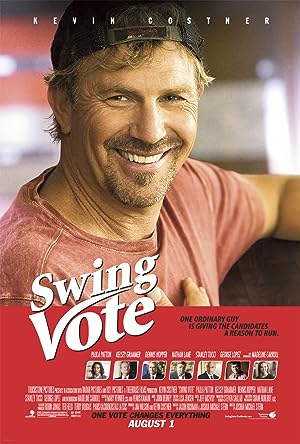 How to Watch Swing Vote 2008 Online in Australia

The cast of Swing Vote

What is Swing Vote about?

November, 2004, New Mexico. Bud is a slacker with one good thing in his life, his engaging fifth-grade daughter Molly. On election day, Bud is supposed to meet her at the polling place. When he doesn't show, she sneaks a ballot and is about to vote when the power goes off. It turns out that New Mexico's electoral votes will decide the contest, and there it's tied with one vote needing recasting - Bud's. The world's media and both presidential candidates, including the current President, descend on Bud in anticipation of his re-vote in two weeks. Can the clueless Bud, even with the help of Molly and a local TV reporter, handle this responsibility?

Where to watch Swing Vote