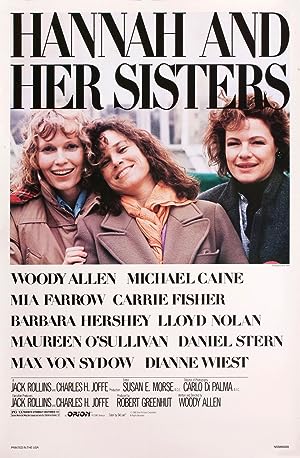 How to Watch Hannah and Her Sisters 1986 Online in Australia

What is Hannah and Her Sisters about?

Hannah, Holly and Lee are adult sisters from a show business family, their boozy actress mother who still believes she's an ingénue that can attract any man she wants, despite still being married to the girls' father, Evan. Hannah, on her second marriage to a man named Elliot, a financial advisor, is the success of the family, taking a break from her acting career to raise her children. Everyone turns to her for advice, while she never talks to others about what she needs or feels. Her first husband, Mickey, is a comedy show writer and hypochondriac, who is going through a crisis as he mistakenly believes he will die soon without a clear belief, as a non-practicing Jew, of what will happen to him in the afterlife. Single Holly is the insecure flaky sister, a struggling and thus continually unemployed actress, who has just started a catering business with her actress friend April, in order to do something constructive with her life. In her own security, Hannah even set up Holly and Mickey together following her own break-up with Mickey, Holly and Mickey's sole date which arguably was the worst night in both their lives. Holly turns to Hannah for everything in her life, including money, despite feeling Hannah overly judgmental about her failures. It's during a catering job that Holly and April meet David, an architect, who seems interested in both of them. Holly's insecurities may threaten her potential relationship with David and friendship with April. Lee, who collects unemployment, is metaphorically the family's piece of clay waiting for the right artist to mold her. She has long lived with artist Frederick, who has contempt for everyone except her, and as such relies on her for whatever his connection to the outside world. This already complex collective becomes even more complex when Elliot contemplates telling Lee that he has fallen in love with her. His attraction to her is as much feeling unneeded by Hannah, who he does not want to hurt regardless of what he decides to do with respect to Lee.

Where to watch Hannah and Her Sisters

Which streaming providers can you watch Hannah and Her Sisters on

The cast of Hannah and Her Sisters

Hannah and Her Sisters Trailer

More comedy tv shows like Hannah and Her Sisters

Watch Hannah and Her Sisters