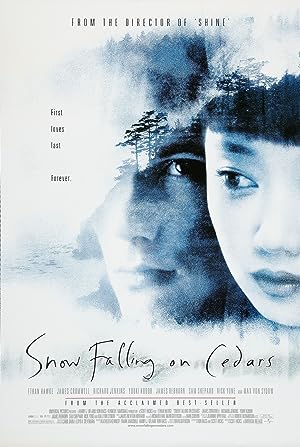 How to Watch Snow Falling on Cedars 1999 Online in Australia

The cast of Snow Falling on Cedars

What is Snow Falling on Cedars about?

It's 1950 on San Pedro Island in the American Pacific Northwest. Commercial fisher Carl Heine Jr.'s dead body is pulled out of the water in a fishing net by his crew, he who died of head trauma. Kazuo Miyamoto is charged with his murder. Carl and Kazuo were once friends, had known each other since childhood, but WWII has placed a strain on any sort of relationship between the ethic Japanese and Caucasian populations of the area, the Japanese population which was and is still substantial on the island. Carl had motive regarding a land dispute between the two families, land which Carl's mother eventually sold from under the Miyamotos and which Carl had just repurchased. Evidence also points to Kazuo being on the water with Carl probably sometime during his last voyage, evidence which Kazuo knew would put him in a bad light, adding on top of being Japanese, and thus decided not to disclose to the investigating sheriff at the time he was questioned. Kazuo and his wife Hatsue's fear come to realization in that there are racist overtones to the questioning by the prosecutor, Alvin Hooks, in playing to existing anti-Japanese sentiment. Among the many locals following the proceedings is Ishmael Chambers, the owner/editor of the local newspaper, he who took it over following the passing of his father, the previous owner Arthur Chambers. Arthur was one of the few Caucasians on the island who came to the defense of the local Japanese during their internment because of the war. Ishmael, a veteran who lost his left arm in battle, has more personal than professional interest in the case as he has been in love with Hatsue since they were in their youth. Hatsue broke off their clandestine romance to marry Kazuo, Ishmael not knowing out of pressure from her mother to marry within their own culture. It is his feelings for Hatsue that Ishmael has his own motives for wanting to find out the truth of what happened to Carl.

Where to watch Snow Falling on Cedars