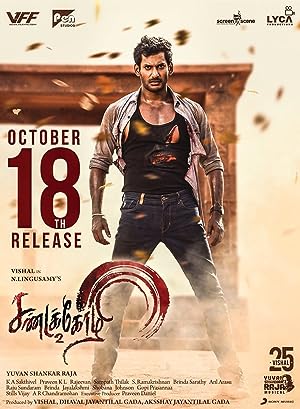 How to Watch Sandakozhi 2 2018 Online in Australia

A minor conflict becomes a feud in a village resulting in the death of Pechi's husband. Durai protects the last person responsible for the death of Pechi's husband, while all others got killed in the feud. The son of Durai, Balu, returns to his village. Durai convinces the villagers for the festival celebrations at the temple to show their unity to the government for the sake of a dam project for the drought-stricken village. Pechi decides to kill the rivals while Balu stands in between them. Balu falls in love with a quirky girl, Sembaruthi. When a serious problem threatens his love and his father's word, Balu decides to put an end to the feud.

Which streaming providers can you watch Sandakozhi 2 on

Here is the comprehensive list of streaming providers that will show Sandakozhi 2 in Australia. If Sandakozhi 2 will appear with other providers further down the line, this table will be updated.

Sandakozhi 2 is a great Action movie, we’ve selected several other movie options that we think you would like to stream if you have watched Sandakozhi 2