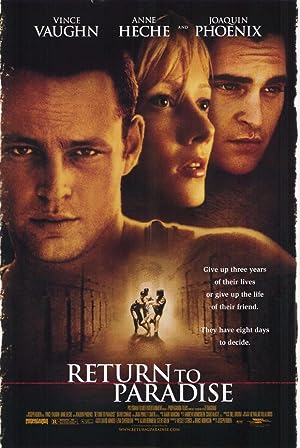 How to Watch Return to Paradise 1998 Online in Australia

The cast of Return to Paradise

What is Return to Paradise about?

Three friends share an exciting vacation in Malaysia, full of fun, drinks, women and hash. When the vacation is over, each have dreams of continuing their lives, and they all go their separate ways. One of them (Phoenix) remains on the tropical paradise to fulfill a dream of working with apes for research. Two years later, a lawyer (Heche) comes to New York and hunts down the other two friends to give some sad news. A few days after they left the island, police raided their camp and found amazingly large quantities of hash left about. Phoenix was still residing there, so he had to take the blame. He is set to be put to death in 8 days, and the only way the charges can be decreased is if the two friends come back to paradise and take their share of the responsibilty. If they do, they both will spend three years in prison. If only one does, he will spend six years behind bars...

Where to watch Return to Paradise