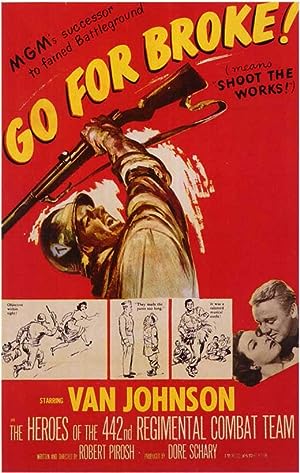 How to Watch Go for Broke! 1951 Online in Australia

The cast of Go for Broke!

What is Go for Broke! about?

A tribute to the U.S. 442nd Regimental Combat Team, formed in 1943 by Presidential permission with Japanese-American volunteers. We follow the training of a platoon under the rueful command of Lt. Mike Grayson who shares common prejudices of the time. The 442nd serve in Italy, then France, distinguishing themselves in skirmishes and battles; gradually and naturally, Grayson's prejudices evaporate with dawning realization that his men are better soldiers than he is. Not preachy.

Where to watch Go for Broke!