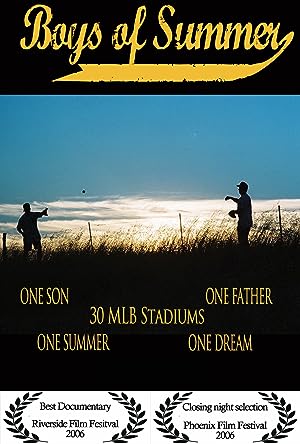 How to Watch Boys of Summer 2006 Online in Australia

The cast of Boys of Summer

What is Boys of Summer about?

My father (who has Parkinson Disease) and I road-tripped 20,000 miles in two months to see a game at each of the 30 Major League Ballparks. We also visited the MLB Hall of Fame, the Negro League Museum and the Field of Dreams in Dyersville, Iowa. We interviewed father and sons, mothers and daughters as well as fellow Parkinsonians everywhere we went. 50% of the proceeds from the sale of this film will be donated to the Michael J Fox Foundation.

Where to watch Boys of Summer