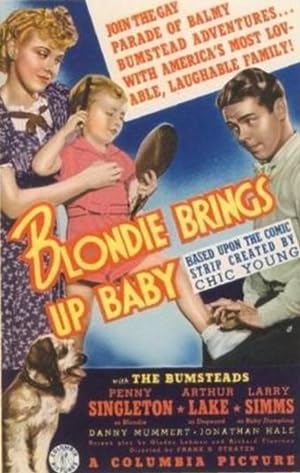 How to Watch Blondie Brings Up Baby 1939 Online in Australia

The cast of Blondie Brings Up Baby

What is Blondie Brings Up Baby about?

A book salesman sells Blondie Bumstead a set of books on child training because he has convinced her that Baby Dumplin is a child prodigy. Meanwhile, J.C. Dithers, boss of Blondie's husband, Dagwood Bumstead, rips Dagwood for altering the plans on an apartment building the construction firm is building for Abner Cartwright and, to keep his job, Dagwood must get Cartwright to sign off on the changes - the latter refuses in order to escape from an unfavorable contract. Baby Dumpling, the genius, is registered at school and Daisy, accompanying him, is picked up by the dog-catcher on the way back home and taken to the pound. Daisy is adopted by Melinda Mason, the crippled daughter of one of the town's wealthiest men. Baby Dumpling looks everywhere and can not find Daisy, and plays hooky from school the next day. Immediately, Blondie and Dagwood suspect kidnapping, and Dagwood learns that Melinda, also missing, was last seen playing with a little boy and a dog. Dagwood promptly heads for the Mason estate, where he is even more promptly arrested as a kidnap suspect.

Where to watch Blondie Brings Up Baby