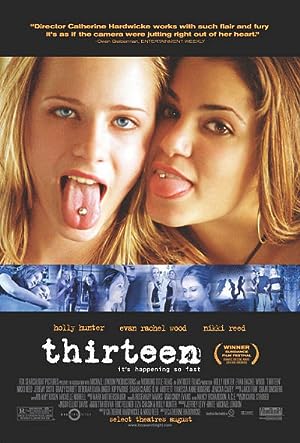 How to Watch Thirteen 2003 Online in Australia

The cast of Thirteen

What is Thirteen about?

At the edge of adolescence, Tracy is a smart straight-A student--if not a little naive (it seems...she smokes and she cuts to alleviate the emotional pain she suffers from having a broken home and hating her mom's boyfriend, Brady.) When she befriends Evie, the most popular and beautiful girl in school, Evie leads Tracy down a path of sex, drugs and petty crime (like stealing money from purses and from stores). As Tracy transforms herself and her identity, her world becomes a boiling, emotional cauldron fueled by new tensions between her and her mother--as well as, teachers and old friends.

Where to watch Thirteen