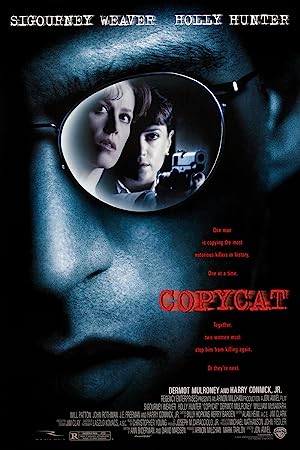 How to Watch Copycat 1995 Online in Australia

The cast of Copycat

What is Copycat about?

In San Francisco, the criminal psychologist Helen Hudson is specialized in serial-killers. During a trial, the accused Daryll Lee Cullum kills a police officer and tries to kill her and she becomes agoraphobic. Now Helen lives a reclusive life with her gay friend Andy that helps her. Sometime later, there is a wave of crimes and Detectives M.J. Monahan and Reuben Goetz are investigating the murder cases. Helen identifies that the murderer is copycatting notorious serial-killers and she anonymously contacts the Police Department. After fourteen phone calls, she is identified by the police. Detectives M.J. and Reuben visit her and Helen teams up with them and prepares the profile of the killer that wants to be famous. But soon the copycat killer Peter Foley contacts and stalks Helen and M.J. and Reuben give protection to her. Will they be capable to stop Foley before the next murder?

Where to watch Copycat