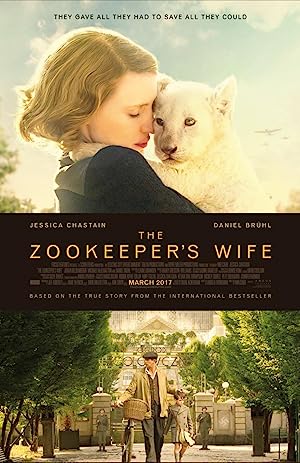 How to Watch The Zookeeper's Wife 2017 Online in Australia

The cast of The Zookeeper's Wife

What is The Zookeeper's Wife about?

War brews over Warsaw in 1939, and while life is still running its course, the Germans are slowly beginning to make their presence felt, with Hitler secretly preparing for the German invasion of Poland. Under those circumstances, the young couple of Jan and Antonina Zabinski continue their daily routine as owners and keepers of the Warsaw Zoo, but soon, as German Luftwaffe's Stukas hammer the Polish capital, their life's work together with the city, will turn to ashes. However, with the zoo liquidated for the war effort and many of its animals tragically perished, what was once an animals' zoo, will now serve as a sanctuary where Antonina, the humanist veterinarian, and Jan can hide the persecuted Polish Jews in plain sight until safe houses are found. That was Jan and Antonina's formidable, yet perilous plan, who regardless of the consequences, refused to wither before the Nazi menace, took matters into their own hands and sheltered 300 Jews under the Germans' noses.

Where to watch The Zookeeper's Wife