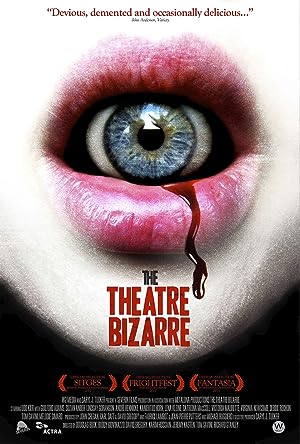 How to Watch The Theatre Bizarre 2011 Online in Australia

The cast of The Theatre Bizarre

What is The Theatre Bizarre about?

Down a seedy city street in her neighborhood, young Enola Penny is obsessed with what appears to be a long abandoned theatre. One night, she sees that the front door is slightly ajar and impulsively decides to sneak inside. But there in the dark, decrepit auditorium, a show unlike any other unfolds before her eyes. Its host is an eerie human puppet named Peg Poett who will introduce Penny to six tales of the bizarre: A couple traveling in a remote part of the French Pyrenees cross paths with a lustful witch; A paranoid lover faces the wrath of a partner who has been pushed to her limit; The Freudian dreams of an unfaithful husband blur the lines between fantasy and reality; The horrors of the real world are interpreted through the mind of a child; A woman addicted to other people's memories gets her fix through the vitreous fluid of her victims' eyeballs; And a perverse obsession with sweets turns sour for a couple in too deep. But as the stories unfold, something much stranger is happening to Enola. Something irreversible and horrific. Something that awaits its next audience in THE THEATRE BIZARRE.

Where to watch The Theatre Bizarre