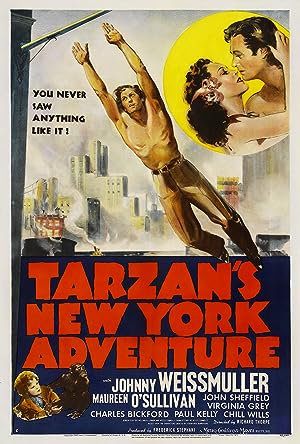 How to Watch Tarzan's New York Adventure 1942 Online in Australia

What is Tarzan's New York Adventure about?

Circus owner Buck Rand kidnaps Boy to perform in his show. He forces a pilot to fly him, Boy and his animal trainer out of the jungle. Tarzan and Jane follow them to New York. At a trial over custody of Boy, Tarzan becomes violent and is jailed. With the help of the pilot's girlfriend Tarzan (who has since escaped, diving off the Brooklyn Bridge) finds the circus. He and the circus elephants complete the classic rescue.