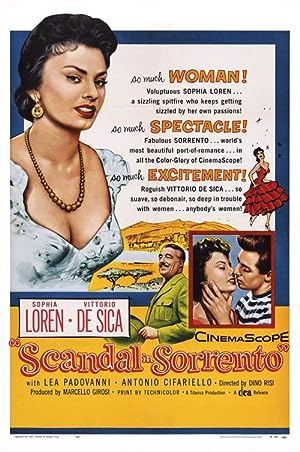 How to Watch Scandal in Sorrento 1955 Online in Australia

The cast of Scandal in Sorrento

What is Scandal in Sorrento about?

Marshall Antonio Carotenuto comes back to native Sorrento to take care of the local fire brigade. But since Sofia, a very nice fishmonger, occupies his native house Antonio share another home with Donna Violante, secretly fall in love with him. Sofia accepts to marry Antonio almost as a joke to make Nicolino, a traffic policeman, getting jealous. The chances for the two deloused sweethearts aren't over as it could appear.

Where to watch Scandal in Sorrento