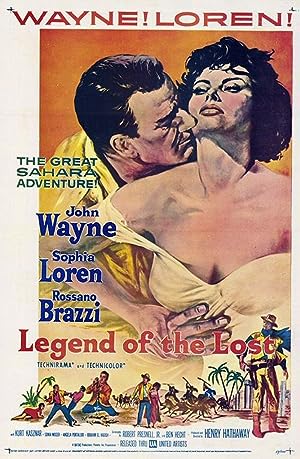 How to Watch Legend of the Lost 1957 Online in Australia

The cast of Legend of the Lost

What is Legend of the Lost about?

Paul Bonnard arrives in Timbuktu in search of a guide to escort him into the Sahara desert. American Joe January takes the job despite misgivings about Bonnard's plans. Dita, a prostitute who has been deeply moved by what appears to be Bonnard's spiritual nature, follows the two men into the desert. Eventually the trio arrives in the ruins of a lost city, where Bonnard hopes to find the treasure his father sought years earlier before disappearing. But what Bonnard finds alters him in unexpected ways, with tragic results.

Where to watch Legend of the Lost

Legend of the Lost Trailer

More Adventure tv shows like Legend of the Lost