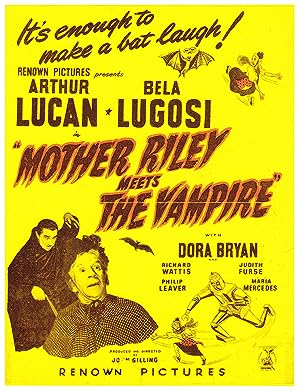 Where to watch Mother Riley Meets the Vampire

What is Mother Riley Meets the Vampire about?

The mysterious figure known as the Vampire comes to England to complete experiments in his mad bid to gain control of the world. When the radar-controlled Robot which he had ordered shipped to him is delivered instead to Mother Riley, the Vampire, through radar control, has the Robot transport itself as well as Mother Riley to the proper destination...as the old lady goes into a whirl of side-splitting action in a determined effort to frustrate the plans of the sinister Vampire.

The cast of Mother Riley Meets the Vampire