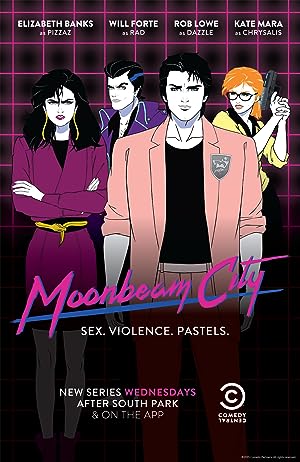 How to Watch Moonbeam City Online in Australia

What is Moonbeam City about?

The show follows the exploits of Dazzle Novak, an idiotic detective who commits more crimes than the criminals he tries to lock up. With the glamorous, tyrannical, chief Pizzaz Miller barking orders and Rad Cunningham, his obnoxious rival, stopping at nothing to destroy him, Dazzle has a lot on his plate. He teams up with the only competent police officer, Chrysalis Tate, to protect their beloved neon-soaked metropolis.

Where to watch Moonbeam City

Which streaming providers can you watch Moonbeam City on

Here is the comprehensive list of streaming providers that will show Moonbeam City in Australia. If Moonbeam City will appear with other providers further down the line, this table will be updated.

The cast of Moonbeam City

Moonbeam City is a great Action movie, we’ve selected several other movie options that we think you would like to stream if you have watched Moonbeam City

Moonbeam City is a great action show, we’ve selected several other show options that we think you would like to stream if you have watched Moonbeam City