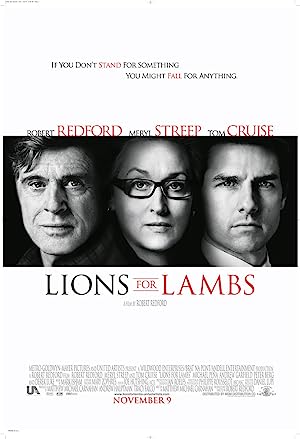 How to Watch Lions for Lambs 2007 Online in Australia

The cast of Lions for Lambs

What is Lions for Lambs about?

Three stories told simultaneous in ninety minutes of real time: a Republican Senator who's a presidential hopeful gives an hour-long interview to a skeptical television reporter, detailing a strategy for victory in Afghanistan; two special forces ambushed on an Afghani ridge await rescue as Taliban forces close in; a poli-sci professor at a California college invites a promising student to re-engage. Decisions press upon the reporter, the student, and the soldiers.

Where to watch Lions for Lambs