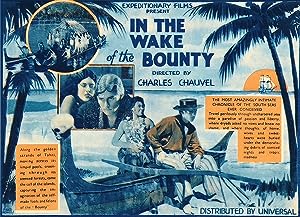 The cast of In the Wake of the Bounty

What is In the Wake of the Bounty about?

A former member of the crew of the HMS Bounty recounts the story of the mutiny aboard ship. The Clauvel's, then, take a look at current day (1932) Tahiti and Pitcairn island. In turn, visiting the descendants of the ship's crew and studying their way of life. Including a search for the wreak of the ship. Stars Errol Flynn in his first movie. And directed by and narrated by Australian Charles Chauvel.

Where to watch In the Wake of the Bounty

Watch In the Wake of the Bounty

More Action movies like In the Wake of the Bounty

More Action tv shows like In the Wake of the Bounty