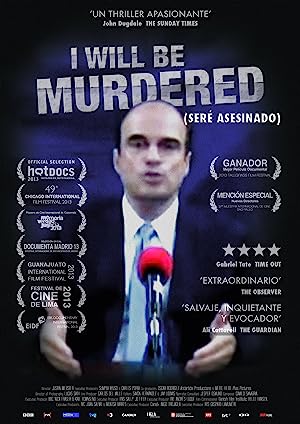 How to Watch I Will Be Murdered 2013 Online in Australia

What is I Will Be Murdered about?

Rodrigo Rosenberg, a well-to-do lawyer from Guatemala's elite, went out cycling one Sunday morning and was found dead hours later, shot to death by hit men. Days before he had recorded a video foretelling his own murder at the hands of the country's president, a film that quickly went viral and led to a national crisis. "Guatemalans, now is the time," had said Rosenberg in the recording, rallying massive demonstrations and protests in favor of justice and against then president Álvaro Colom even after his funeral. With streets and squares filled with banners calling for his resignation, Colom called in help from the UN-formed commission against impunity, the CICIG, and high-profile Spanish attorney Carlos Castresana. The investigation of the Rosenberg case proved a complicated affair in one of the most violent places in the world, where drive-by shootings, kidnappings, and impunity have been the norm, unremitting shock waves following the bloody civil war that ravaged Guatemala 13 years ago. What ensued was a tense year-long search for justice, a sinuous journey into the miry underworld of conspiracy and corruption, a surprising love story, and the depths of Rosenberg's soul. 'I Will Be Murdered' delivers an intensely intimate portrait of a flawed, disturbed hero whose pursuit of truth led to a shocking turn of events.

Where to watch I Will Be Murdered

Which streaming providers can you watch I Will Be Murdered on

The cast of I Will Be Murdered

I Will Be Murdered Trailer

Watch I Will Be Murdered