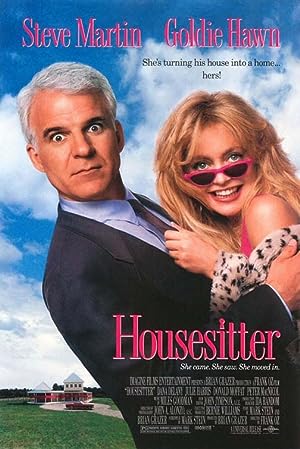 How to Watch HouseSitter 1992 Online in Australia

What is HouseSitter about?

Davis builds his dream house and presents it to Becky with a proposal of marriage. She turns him down. He leaves the house, still with a ribbon running around it and returns to the city, terribly smitten with Becky. He meets Gwen who has an interesting relationship with the truth. He spends the night with her, but leaves while she is sleeping. She takes his description of the house, searches it out, and moves in. The residents of Davis' home town become curious and she invents a marriage, a courtship, and and an entire history. Davis' parents meet Gwen and are immediately taken with her. By the time Davis finds out what has happened, 2 things have happened, the whole town thinks he's married, and Becky tells him that Gwen has made her see him in a whole new light. Gwen and Davis agree that she can pretend to be his wife and get free rent while Davis works on Becky until they can announce a divorce. The trouble is that no one in the town wants them to separate and keep trying to help them reconcile.

Where to watch HouseSitter

Which streaming providers can you watch HouseSitter on

Here is the comprehensive list of streaming providers that will show HouseSitter in Australia. If HouseSitter will appear with other providers further down the line, this table will be updated.

The cast of HouseSitter

HouseSitter is a great Comedy movie, we’ve selected several other movie options that we think you would like to stream if you have watched HouseSitter

HouseSitter is a great comedy show, we’ve selected several other show options that we think you would like to stream if you have watched HouseSitter