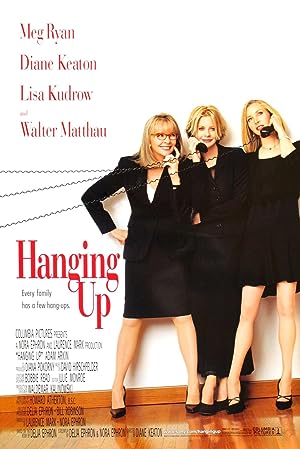 How to Watch Hanging Up 2000 Online in Australia

The cast of Hanging Up

What is Hanging Up about?

Georgia Mozell, Eve Marks and Maddy Mozell are adult sisters. Georgia is the editor of her own wildly successful self-titled women's magazine. She strives for publicity at any cost. Party planner Eve is the mother hen of the group, not only of her own family, but also of her siblings and father as their mother, Pat, not only emotionally left their father when they divorced, but her daughters as well. And Maddy is a vacuous soap opera actress who has always struggled for her own identity. Despite being as busy with her own life as the others, Eve is the only one of the three who deals with the long term hospitalization of their cantankerous seventy-nine year old father, Lou Mozell, when he enters the early stages of dementia, and the associated outcomes of that hospitalization. Eve's caring for Lou is despite an especially hurtful incident with him seven years earlier. As the emotional aspect of looking after Lou becomes more and more stressful, Eve has to figure out how to maintain her own sanity, while dealing with her sisters, who believe they too are part of their father's care while they don't lift a finger to help.

Where to watch Hanging Up