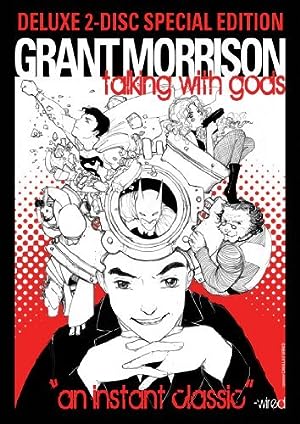 How to Watch Grant Morrison: Talking with Gods 2010 Online in Australia

What is Grant Morrison: Talking with Gods about?

Philosopher, pop-icon, shaman and story teller - as one of the most influential comic book writers in the market today, Grant Morrison is all of these things. His explosive and often controversial 30 year career has made him a household name for comic fans, and he shows no signs of slowing down. Morrison's career is now taking a new turn, as he explores media beyond comic books. With film and television projects on the horizon, more and more people are asking "Who is Grant Morrison?" Grant Morrison: Talking with Gods is a feature length documentary that takes an in depth look at the life, career and mind of the man behind such pivotal titles as Batman RIP, The Invisibles, All Star Superman, The New X-Men, and many more. Featuring candid interviews with Morrison and his most important collaborators, Talking with Gods reveals an intelligent and thought provoking side of comic books that is often overlooked in Hollywood adaptations. Morrison's bold reinventions of traditional super-heroes, his groundbreaking original work, and his ability to push the metaphysical boundaries of comics have made him one of the most critically-acclaimed and best-selling writers in the industry. For the first time ever, Morrison recounts his own life story: his early days, growing up in Scotland; the start of his comics career; the crazy years of the '90s, as his life and his comics became enmeshed; and his more recent attempts to turn personal troubles and social darkness into compelling comics.

Where to watch Grant Morrison: Talking with Gods

Which streaming providers can you watch Grant Morrison: Talking with Gods on

The cast of Grant Morrison: Talking with Gods