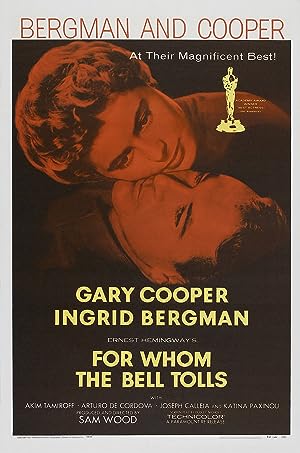 The cast of For Whom the Bell Tolls

What is For Whom the Bell Tolls about?

Spain in the 1930s is the place to be for a man of action like Robert Jordan. There is a civil war going on and Jordan who has joined up on the side that appeals most to idealists of that era -- like Ernest Hemingway and his friends -- has been given a high-risk assignment up in the mountains. He awaits the right time to blow up a bridge in a cave. Pilar, who is in charge there, has an ability to foretell the future. And so that night she encourages Maria, a young girl ravaged by enemy soldiers, to join Jordan who has decided to spend the night under the stars.

Where to watch For Whom the Bell Tolls

For Whom the Bell Tolls Trailer

More Adventure movies like For Whom the Bell Tolls

More Adventure tv shows like For Whom the Bell Tolls