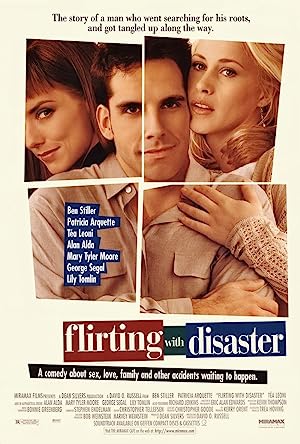 How to Watch Flirting with Disaster 1996 Online in Australia

The cast of Flirting with Disaster

What is Flirting with Disaster about?

Mel Coplin departs on a mission of discovery dragging his wife and 4 month old son behind. He and wife, Nancy, won't agree on a name for their son until adopted Mel gets in touch with his roots. He assures her that once he knows who he really is, the right name for their boy will be a snap. Enlisting the aid of student-psychologist and part-time adoption agent, Tina Kalb, they embark on a journey across the United States to find Mel's "birth" mother. "The best part," Mel tells Nancy, "is it's all free." Tina is finishing her dissertation and will film the happy reunion of mother and child as part of her research. For this privilege, she's footing the bill. His adoptive parents are left behind feeling abandoned by an ungrateful son. Clerical errors, mistaken identities, Nancy's misplaced high school friend and his gay lover, and a super-charged libido here and there are thrown into the mix along the way until -- at last -- Mel's real parents, the Schlictings (mispronounced as "Shit-kings" by Mrs. Coplin), are discovered in remote New Mexico. There, Mel begins to wonder if he would have been better off not knowing these people, after all.

Where to watch Flirting with Disaster