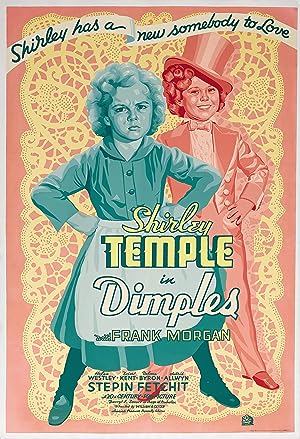 How to Watch Dimples 1936 Online in Australia

The cast of Dimples

What is Dimples about?

Dimples is a busker - a street entertainer, and lives in mid-19th century New York City's Bowery with her kindhearted but pickpocketing Grandfather, Prof. Eustace Appleby. Dimples is a talented child and is hired to perform at a party in the home of Mrs. Caroline Drew, an elderly widow living in Washington Square. Dimples delights the gathering and charms not only the elderly mistress of the house but her nephew Allen as well, a theatrical producer betrothed to a lovely society belle. Allen engages Dimples to perform the role of Little Eva in his production of "Uncle Tom's Cabin" while Mrs. Drew makes it possible for Dimples to remain in her genteel home and enjoy its benefits. Various complications ensue and Dimples bravely makes the decision to sacrifice her happiness to return to her slum dwelling Grandfather. Mrs. Drew traces Dimples's whereabouts and convinces Prof. Appleby that his lovely granddaughter deserves something better than a life of poverty and crime in the Bowery. The situation is resolved to everyone's satisfaction and the film ends with Dimples performing in New York City's first minstrel show.

Where to watch Dimples