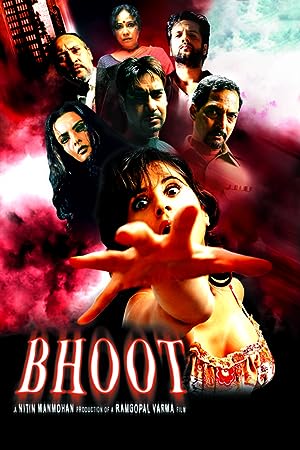 How to Watch Bhoot 2003 Online in Australia

The cast of Bhoot

What is Bhoot about?

Vishal (Ajay Devgan), a stock analyst, and his wife Swati (Urmila Matondkar). The two are in search for a flat in Mumbai. Vishal finds the perfect place on the 12th floor of a high-rise apartment building. However, the apartment has a horrifying past. The previous occupant of the flat, a young woman had killed her child and jumped from the balcony and died. Swati learns about this incident shortly after moving in and becomes oddly fixated with the story. Then, a series of inexplicable experiences drive Swati to near madness. Vishal becomes helpless and convinced his wife has developed some sort of psychological disorder. He consults a psychiatrist, Dr. Rajan (Victor Banerjee). The couple's maid (Seema Biswas) believes Swati to be possessed, and calls in an exorcist (Rekha). Meanwhile, other seemingly unrelated events take place around the building. The watchman (Sabeer Masani) is being terrorized, one of the residents Sanjay (Fardeen Khan) is behaving erratically, and a murder occurs. Inspector Liaqat Quereshi (Nana Patekar) is sent to investigate the murder at the building. All the while, neither the psychiatrist nor the exorcist makes much progress with Swati.

Where to watch Bhoot