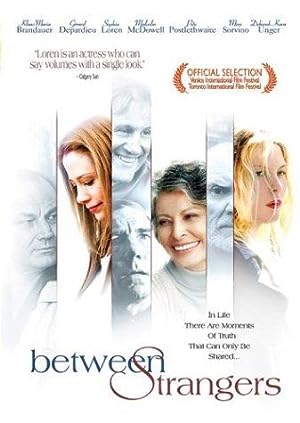 How to Watch Between Strangers 2002 Online in Australia

What is Between Strangers about?

Toronto, 2001. Three women in spiritual crisis. In secret from her dismissive husband, Olivia draws what she sees in dreams. Catherine, a world-class cellist, has abandoned her husband and daughter to hunt down her father. Photojournalist Natalia, in her famous father's footsteps, scores her first Time Magazine cover, but realizes she has paid an incalculable price for the photo. Olivia has another secret besides her art; Catherine makes discoveries about her father; Natalia receives a gift that's undeserved: these complications push each woman in a new and unexpected direction.

Where to watch Between Strangers

Which streaming providers can you watch Between Strangers on

The cast of Between Strangers