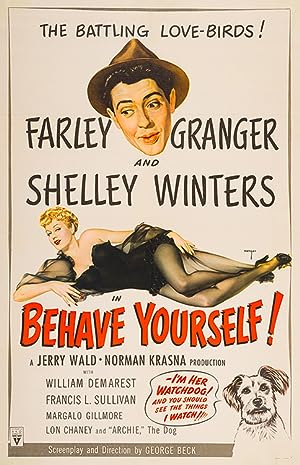 How to Watch Behave Yourself! 1951 Online in Australia

Where to watch Behave Yourself!

What is Behave Yourself! about?

Beyond living in his disapproving mother-in-law's house while he establishes his accounting career, Bill Denny is happily married to Kate Denny, the two who are celebrating their second wedding anniversary. Bill thinks he's come home without a present for Kate since a stray Welsh terrier caused a ruckus in the store where he was going to buy the present. However Kate believes her anniversary present is the terrier who followed Bill home and who Kate eventually names Archie. What neither Bill or Kate is aware of is that the terrier escaped from its owners, a bunch a smugglers who trained the terrier to be the contact for the switch between the smuggled goods and the money. Bill does whatever he can to get rid of the terrier as he and Archie don't get along. Meanwhile, the people buying the smuggled goods believe the smugglers have swindled them since the terrier has not made contact. So when ads appear in the lost and found section about a missing Welsh terrier, Bill, in trying to return Archie to his rightful owners, unwittingly gets caught in the middle. And Kate can't quite understand why Archie is always trying to go off on their walks, he doing what he was trained to do in trying to make contact for the drop. Add a harried police detective investigating a series a murders in which Bill seems to be involved, and chaos ensues.

Which streaming providers can you watch Behave Yourself! on

The cast of Behave Yourself!