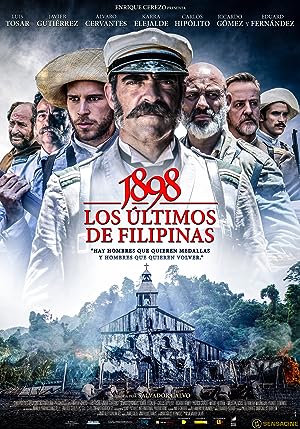 How to Watch 1898: Our Last Men in the Philippines 2016 Online in Australia

The cast of 1898: Our Last Men in the Philippines

What is 1898: Our Last Men in the Philippines about?

In 1898, Spain sends a military squad to the town of Baler, Philippines, to protect one of the last colonies of the Spanish Empire, to avoid rebellious natives from recovering its ancient territories. Lead by Captain Enrique de las Morenas and Lieutenant Cerezo, proud military men, the soldiers are stalked by night by the rebels, and are forced to seek refuge in the church run by Fray Carmelo, Baler's priest. Turning the church into a military fort, the unrelenting heat and malaria starts to sweep across the men. After the Captain's death by a disease called beriberi, Cerezo steps in as the new leader of the squad, faced with a constant power struggle with Jimeno, a soldier from the previous squad annihilated by the rebels. Becoming more and more paranoid and obsessive with the victory and the glory of the Spanish Empire, the rebels close to Cerezo explain that Spain has already sold the Philippine Islands to the USA, ceding all the colonies from the Spanish Empire, and that the war is over. But Cerezo does not believe in the newspapers given by the rebels and is still obsessed to win at all cost. He makes a last stand in the church with his men, prolonging the battle to several months where one of the soldiers, Carlos, who falls victim to opium, searches a way to end the conflict, suspecting that all is lost, and wanting to prevent the death of his comrades.

Where to watch 1898: Our Last Men in the Philippines

More Drama movies like 1898: Our Last Men in the Philippines

More Drama tv shows like 1898: Our Last Men in the Philippines