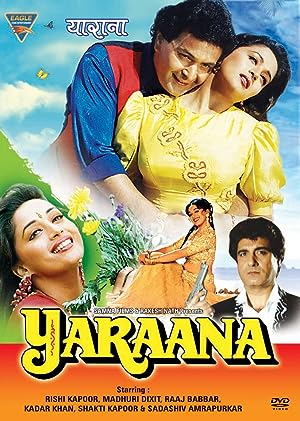 How to Watch Yaraana 1995 Online in Australia

Lalita (Madhuri Dixit) catches the eye of J.B. (Raj Babbar) and he immediately falls in love with her and decides he must marry her. He bribes Lalita's uncle Madanlal (Tej Sapru) into convincing Lalita to marry him. However, Lalita refuses and J.B. kidnaps her and forces her to marry him. One fateful night, Lalita manages to escape and she meets Raj (Rishi Kapoor) whose family consists of an olderly grandfather (Kader Khan) who dotes on him and wants him to get married at any cost. Raj and Lalita fall in love with each other and his grandfather also approves of Lalita. Raj and Lalita are about to get married. However, J.B. grows wise of Lalita's whereabouts and in no time he tracks her down. J.B. reveals to Raj and his grandfather about Lalita's true identity which was just one side of a coin. J.B. forcibly takes Lalita with him and Lalita agrees to stay with him forever to save her chastity and honour. But will she be able to live with an overpowering and cruel man like J.B.? Will Raj ever be able to find out the truth about Lalita's past?