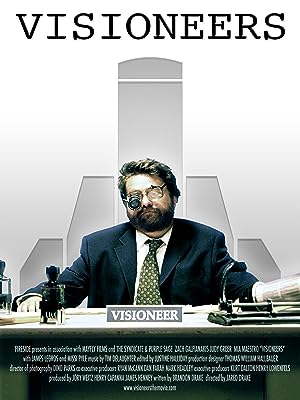 How to Watch Visioneers 2008 Online in Australia

The Jeffers Corporation is a world success, endorsed by the U.S. President, pitching productivity and happy talk. George is a third level employee, supervising three or four others. Around the world, people are exploding as the stress of denying feelings takes its toll. The Jeffers' response: mind control. George and his wife are miserable: he's impotent with occasional fits of infantile pique. She's reading a book on happiness, trying everything. His brother, released from prison, starts of freedom-of-expression movement in George's backyard. Plus there's Charisma, a woman from Level Four who sends him paperwork - with smiley faces. Can George connect?

Which streaming providers can you watch Visioneers on

Here is the comprehensive list of streaming providers that will show Visioneers in Australia. If Visioneers will appear with other providers further down the line, this table will be updated.

Visioneers is a great Comedy movie, we’ve selected several other movie options that we think you would like to stream if you have watched Visioneers

Visioneers is a great comedy show, we’ve selected several other show options that we think you would like to stream if you have watched Visioneers