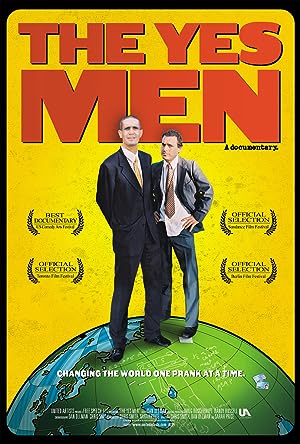 How to Watch The Yes Men 2003 Online in Australia

What is The Yes Men about?

A comedic documentary which follows The Yes Men, a small group of prankster activists, as they gain world-wide notoriety for impersonating the World Trade Organization on television and at business conferences around the world. The film begins when two members of The Yes Men, Andy and Mike, set up a website that mimics the World Trade Organization's--and it's mistaken for the real thing. They play along with the ruse and soon find themselves invited to important functions as WTO representatives. Delighted to represent the organization they politically oppose, Andy and Mike don thrift-store suits and set out to shock unwitting audiences with darkly comic satire that highlights the worst aspects of global free trade.

Where to watch The Yes Men

Which streaming providers can you watch The Yes Men on

Here is the comprehensive list of streaming providers that will show The Yes Men in Australia. If The Yes Men will appear with other providers further down the line, this table will be updated.

The cast of The Yes Men

The Yes Men is a great Comedy movie, we’ve selected several other movie options that we think you would like to stream if you have watched The Yes Men

The Yes Men is a great comedy show, we’ve selected several other show options that we think you would like to stream if you have watched The Yes Men