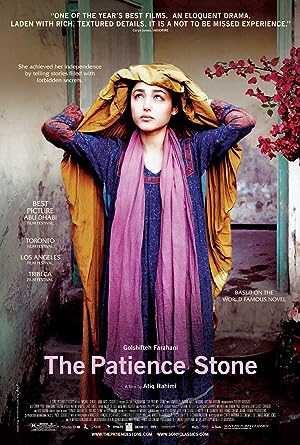 How to Watch The Patience Stone 2012 Online in Australia

The cast of The Patience Stone

What is The Patience Stone about?

Somewhere, in Afghanistan or elsewhere, in a country torn apart by a war... A young woman in her thirties watches over her older husband in a decrepit room. He is reduced to the state of a vegetable because of a bullet in the neck. Not only is he abandoned by his companions of the Jihad, but also by his brothers. One day, the woman decides to tell the truth to him about her feelings about their relationship to her silent husband. She talks about her childhood, her suffering, her frustrations, her loneliness, her dreams, her desires... She says things she could never have done before, even though they have been married for the past 10 years. Therefore, this paralyzed man unconsciously becomes syngue sabour, a magic stone which, according to Persian mythology, when placed in front of a person shields her from unhappiness, suffering, pains and miseries. In this wait for her husband to come back to life, the woman struggles to survive and live. She finds refuge in her aunt's place, who is a prostitute, and the only relative who understands her. The woman seeks to free herself from suffering through the words she delivers audaciously to her husband. But after weeks looking after him, she will actually reveal herself in the relationship she starts with a young soldier...

Where to watch The Patience Stone