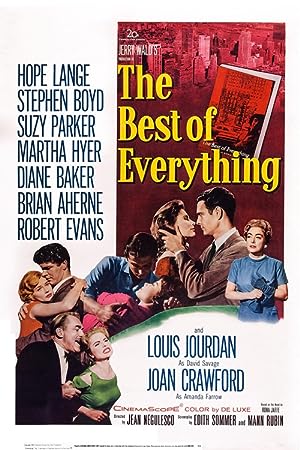 How to Watch The Best of Everything 1959 Online in Australia

The cast of The Best of Everything

What is The Best of Everything about?

With her unofficial fiancé Eddie Harris studying in England for a year, Radcliffe educated Caroline Bender decides to get her first ever job as a secretary at Manhattan located Fabian Publishing, which offers its employees "the best of everything". There, she finds her story is somewhat similar to all the other secretaries, who are biding their time in the secretarial pool either before getting married - to a current or future beau - or moving on to their dream job. In the latter category is aspiring actress Gregg Adams, who with fellow secretary, the naive and inexperienced April Morrison, become Caroline's new roommates. Caroline also finds that as a secretary to the editors, she has to learn the special needs and foibles of each. They include the "witch" Amanda Farrow whose demanding exterior masks a truly lonely woman, the aging Lothario Fred Shalimar, and the understanding Mike Rice, whose best friend is a bottle of booze. The path to true happiness for each of Caroline, Gregg and April has its bumps along the way. After an incident in her personal life as well as one at work, Caroline's life plans change to thoughts of being one of the editors. Both Amanda and Mike hope that Caroline doesn't get this wish, each hoping for a different reason.

Where to watch The Best of Everything

The Best of Everything Trailer

Watch The Best of Everything

More Drama tv shows like The Best of Everything