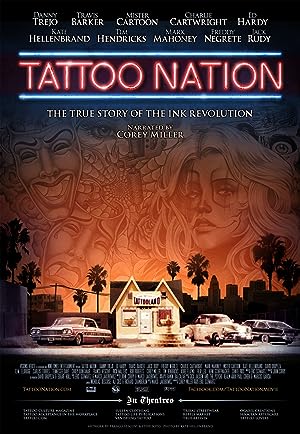 How to Watch Tattoo Nation 2013 Online in Australia

The cast of Tattoo Nation

What is Tattoo Nation about?

Tattoos used to be a sign of rebellion. A middle finger salute to the rest of the world. Outlaw bikers got tattoos. Sailors on leave in Singapore got tattoos. Lifers in the joint got tattoos. But now it seems everywhere you go, everywhere you look - somebody is wearing some ink. In fact one out of every three US adults under 40 has one or more tattoos. So what happened? How did tattoo go from something that was put on you to an expression that comes from within you? Tattoo Nation tells the story of a few people who helped transform the world of tattoo, and the way we think about tattoos, forever. That transformation is the subject of the new documentary film, TATTOO NATION. TATTOO NATION follows three tattoo pioneers, Charlie Cartwright, Jack Rudy and Freddy Negrete, and shows how a new, fine line technique using detail and shading to achieve a remarkable realism on skin revolutionized the world of ink. In 1975, Cartwright and Rudy boldly opened the first tattoo parlor in the heart of East LA's Chicano community. They hired a recently paroled teenager who, while in jail, unknowingly established iconic images that spoke to an entire generation of Chicanos. Freddy Negrete became the first professional Chicano artist employed by a mainstream tattoo parlor - a tattoo parlor that was embraced as a new vehicle for self-expression by the Chicano community in East Los Angeles. For the first time, these legendary figures tell their stories in a feature-length documentary film. Narrated by LA Ink's Corey Miller, the film features Danny Trejo and Travis Barker. Included are other important figures such as Ed Hardy, Mark Mahoney, Tim Hendricks and Mister Cartoon, with David Oropeza and "Chuco" Caballero, winners of many prestigious tattoo competitions. Their victories brought international recognition to the uniquely American approach known as "Black & Grey". The world of tattoo, and the way we regard tattoo, was forever changed.

Where to watch Tattoo Nation