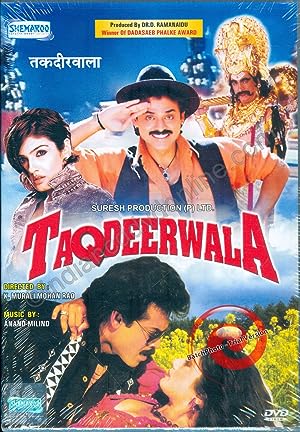 How to Watch Taqdeerwala 1995 Online in Australia

A simpleton Suraj stays in a small house with his widowed mother his friend Pandu and a Gopalji when he was a kid his family owned a huge place known as Swarna palace which went into debts.Suraj has no means of income but he wants to gift back the palace to his mother and can to anything for it doesn't matter if he has to join hands with local goon Chota Raavan.Lily is a rival of Chota Ravan whom Suraj loves but she doesn't care for him.In the universe Yamraj and Chitragupt loose and important book called Bhavishyavani which has details of every human being living on earth the book falls into Suraj's house and his luck starts after he sees his future he soon becomes a millionaire and gifts his mother Swarna palace while Lord Dharma takes all powers of Yamraj and Chitragupt and asks them to go on earth and find the book within a month if they fail all their life they will have to live on earth as human beings.One day Raja opens the book to see his future and is shattered after reading that his mother will die tonight,will Raja be able to save his mother after seeing the future and how will Yamraj and Chitragupt find the book on earth.