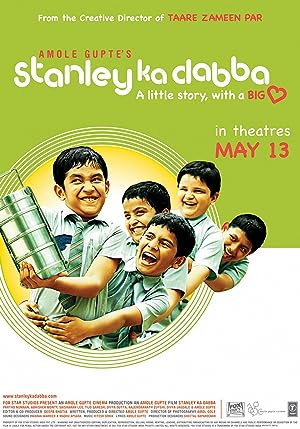 How to Watch Stanley Ka Dabba 2011 Online in Australia

What is Stanley Ka Dabba about?

Stanley studies in an all-boys Holy Family High School in Andheri East, Mumbai. While his class-mates bring their very own Tiffin-boxes, Stanley does not do so on the pretext that his mother is away, and shares food with Aman Mehra and others much to the chagrin of the Hindi Teacher, Babubhai Verma, who not only cajoles fellow-teachers, but virtually forces children, to share their food with him. With extra classes being imposed on both students and teachers, and the recess-breaks being doubled, parents are also forced to pack more food in lunch-boxes. When students evade Babubhai and continue sharing food with Stanley, he calls the latter aside and warns him that he cannot attend school until and unless he brings his own food. Watch what impact this has on Stanley, teachers, and his class-mates.

Where to watch Stanley Ka Dabba

Which streaming providers can you watch Stanley Ka Dabba on

The cast of Stanley Ka Dabba

Stanley Ka Dabba is a great Comedy movie, we’ve selected several other movie options that we think you would like to stream if you have watched Stanley Ka Dabba

Stanley Ka Dabba is a great comedy show, we’ve selected several other show options that we think you would like to stream if you have watched Stanley Ka Dabba