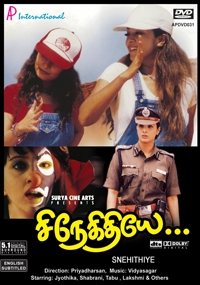 How to Watch Snegithiye 2000 Online in Australia

After the passing away of her parents in an automobile accident, Radhika moves in to live with her aunt, Malathi, and studies Zoology in Lexicon Science College. She is very friendly with Basu Subtankar and both, along with other girls, create quite a ruckus, much to the chagrin of their teachers and the College Principal. In addition to this, they are also staunch rivals of NRI Geetha Damodar, who wants to be the Student Chair. Radhika competes, there is a tie, but the teachers overturn Radhika's votes due to many complaints against her, and elect Geetha as the Chair. When Malathi wants Radhika to wed, both girls create a fictional character, name him Ramesh, and tell Malathi that Radhika is in love with Ramesh. Complications arise when a real male named Ramesh surfaces, is subsequently killed, and the duo become suspects amidst a web of deceit and lies created by one of four persons in their lives, namely Malati herself, Geetha, a mysterious woman who sometimes poses as Ramesh's mother and other times as Geetha's guardian, and an fourth unknown person - leading the duo to a roller-coaster ride with both the police and the real killer on their tails.