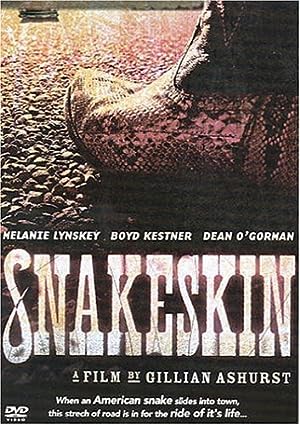 How to Watch Snakeskin 2001 Online in Australia

The cast of Snakeskin

What is Snakeskin about?

Alice (Lynskey) lives in suburban Christchurch, the 'safest place in the world', but she longs for an adventure of American proportions (guns, murder, sex, drugs etc). Her best friend Craig (O'Gorman) changes his name to Johnny because Craig isn't heroic enough for Alice. He is in love with her and waiting for her to settle down so that he can be with her. She likes hanging out with him because of the hot as car he did up himself, a convertible Valiant. Together they roam the roads around SE NZ picking up hitchhikers and looking for excitement. One day they pick up Seth, an American Texas type, with snakeskin boots and a cowboy hat. He is on the run from a gang of skinheads who he stole money from, a Mr. Trippy truck with a couple who he stole a whole crap load of drugs off, and a big Moari dude on a motorcycle. Alice is immediately enchanted by Seth, Johnny jealous. Seth tricks Alice into taking a trip with him. The chase leads them away from their home and toward the hazardous roads over the Southern Alps. As they head toward the coast Alices trip turns bad and she begins hallucinating, or is Seth really superhuman?

Where to watch Snakeskin