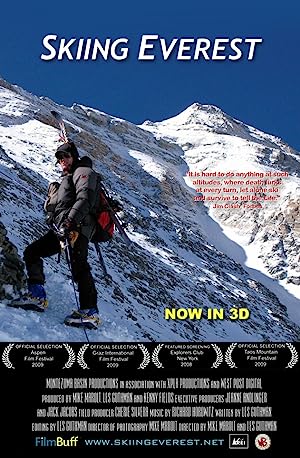 How to Watch Skiing Everest 2009 Online in Australia

What is Skiing Everest about?

"Skiing Everest" is the first documentary about the small elite fraternity of high-altitude skiers who climb the highest peaks in the world in pure Alpine style, carrying their skis and declining to use supplemental oxygen. At the top of the world, high in the Death Zone, they lock into their skis and challenge the most dangerous slopes in the world - under weather conditions that are as perilous as the thin air, hidden crevasses, and 10,000 ft. sheer faces that drop into Nepal and Tibet far below.

Where to watch Skiing Everest

Which streaming providers can you watch Skiing Everest on

Here is the comprehensive list of streaming providers that will show Skiing Everest in Australia. If Skiing Everest will appear with other providers further down the line, this table will be updated.

The cast of Skiing Everest

Skiing Everest is a great Adventure movie, we’ve selected several other movie options that we think you would like to stream if you have watched Skiing Everest

Skiing Everest is a great adventure show, we’ve selected several other show options that we think you would like to stream if you have watched Skiing Everest