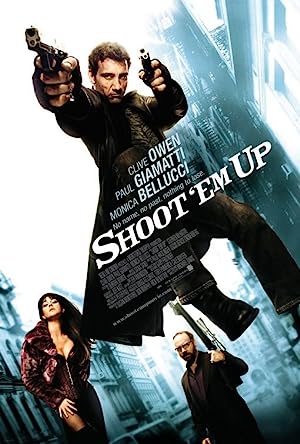 How to Watch Shoot 'Em Up 2007 Online in Australia

The cast of Shoot 'Em Up

What is Shoot 'Em Up about?

Late at night, in an unnamed U.S. city, a solitary man sits at a bus stop. A pregnant woman runs by, pursued by a man with a gun. With reluctance, the man at the bus stop rescues her and assists with the baby's delivery, while additional pursuers fire at them, including the gang's particularly nasty leader, an intuitive man named Hertz. Our hero, known only as Smith, determines to save the child and find out why Hertz wants the baby dead. At a local bordello, he tries to employ a lactating hooker to watch the child, but things quickly escalate, and this makeshift family is soon on the run. Heavy metal music calms the baby. Why? A laboratory, gun factory, and presidential campaign all figure in Smith's quest for the child's safe deliverance.

Where to watch Shoot 'Em Up