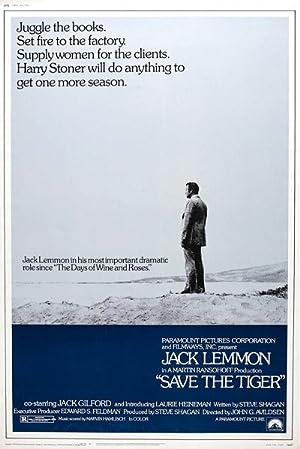 How to Watch Save the Tiger 1973 Online in Australia

The cast of Save the Tiger

What is Save the Tiger about?

The film depicts a day and a half in Harry Stoner's life. Harry is down on his luck, and trapped in his own indulgences. He daydreams about his youth, trying to escape from the fact that business is rotten and his company owes bundles of money. His day is filled with unusual episodes as he picks up a hitchhiker/prostitute, arranges for his company's warehouse to burn down so he can collect the insurance-money, he hires strippers for his buddies and gets engaged in an animal rights campaign, a fashion show and experiences a rather uncomfortable flashback to the war.

Where to watch Save the Tiger

Save the Tiger Trailer