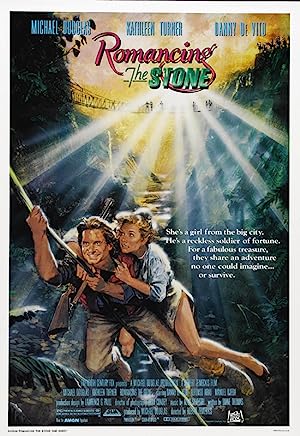 How to Watch Romancing the Stone 1984 Online in Australia

The cast of Romancing the Stone

What is Romancing the Stone about?

Joan Wilder, a mousy romance novelist, receives a treasure map in the mail from her recently murdered brother-in-law. Meanwhile, her sister Elaine is kidnapped in Colombia and the two criminals responsible demand that she travel to Colombia to exchange the map for her sister. Joan does, and quickly becomes lost in the jungle after being waylayed by Zolo, a vicious and corrupt Colombian cop who will stop at nothing to obtain the map. There, she meets an irreverent soldier-of-fortune named Jack Colton who agrees to bring her back to civilization. Together, they embark upon an adventure that could be straight out of Joan's novels.

Where to watch Romancing the Stone