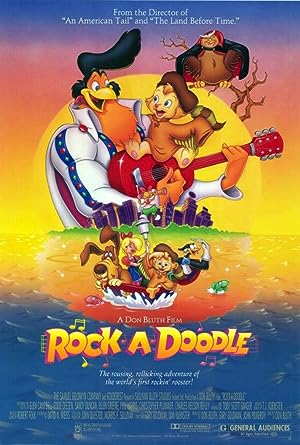 How to Watch Rock-A-Doodle 1991 Online in Australia

What is Rock-A-Doodle about?

Edmund is a boy whose favorite story of Chanticleer, a rooster whose singing makes the sun rise every morning until the Grand Duke of Owls, whose kind despises the bright sun, makes him look like a fraud. With Chanticleer driven from his farm, the owls put it under a spell of perpetual darkness and rain. As Edmund's own farm floods, he calls to Chanticleer, only to summon the Duke himself who transforms him into a kitten to devour him. Rescued by Chanticleer's former friends Patou the hound, Snipes the magpie and Peepers the mouse, they go on an adventure to the city where the rooster had gone and became a great singing rock star!

Where to watch Rock-A-Doodle

Which streaming providers can you watch Rock-A-Doodle on

Here is the comprehensive list of streaming providers that will show Rock-A-Doodle in Australia. If Rock-A-Doodle will appear with other providers further down the line, this table will be updated.

The cast of Rock-A-Doodle

Rock-A-Doodle is a great Adventure movie, we’ve selected several other movie options that we think you would like to stream if you have watched Rock-A-Doodle

Rock-A-Doodle is a great adventure show, we’ve selected several other show options that we think you would like to stream if you have watched Rock-A-Doodle